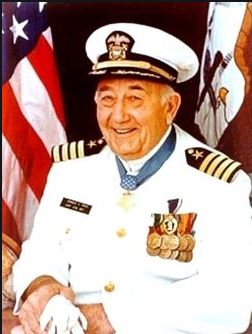 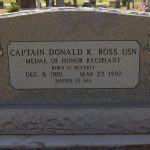 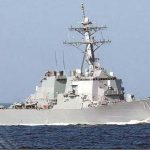 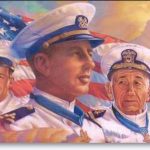 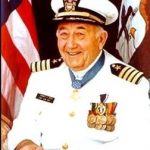 Captain Donald Kirby Ross, was born on December 8, 1910, in Beverly, Kansas. He graduated basic training at Naval Station, San Diego. He was assigned to the battleship USS Nevada, in October of 1940. On December 7, 1941, when the Japanese attack the USS Nevada at Pearl Harbor, it was badly damaged by bombs and Torpedoes. Captain Ross distinguished himself by taking responsibility to furnish power to get his ship underway, the only battleship to do so during the Japanese attack. The forward dynamo room was filled with smoke and steam, so Captain Ross ordered his men to leave and he stayed in there servicing until he was blinded and fell unconscious. He was unconscious for the second time and after waking up, he continued his duties so his ship would not be beached. His actions kept the ship under power, preventing it from sinking in the channel and blocking other ships. He entered the hospital three days after the attack and his vision was returned to normal after three weeks. He returned to the Nevada, on December 17, 1941 and stayed through the duration of the war. He retired from active duty in July of 1956 after twenty-seven years of service. Captain Ross was awarded the Medal of Honor by Admiral Chester Nimitz on April 18, 1942 and became the first person to receive the medal in World War 11. He was also awarded the Purple Heart. Captain Ross attended the 50th., Anniversary ceremonies at Pearl Harbor on December 7, 1991. He was given the honor of introducing President George H.W. Bush. He also participated in the dedication of a memorial to his old ship, USS Nevada. Captain Ross died of a heart attack on May 27, 1992, at the age of 81 in Bremerton, Washington. His ashes were scattered at sea over the USS Nevada. In 1977, a guided-missile destroyer, USS Ross was named in his honor. We Honor you, Sir and thank you for your Service and Sacrifice to our Country! You are a True Hero and we will always Honor you!