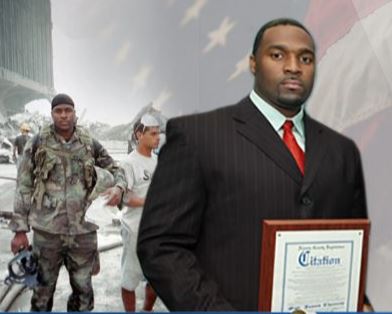 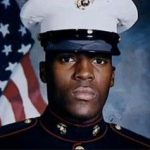 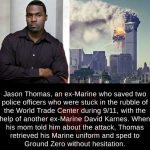 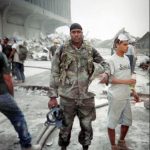 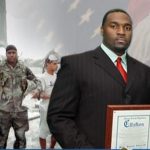 A Hero To Our Country, Jason Thomas

On the morning of September 11, 2001, Jason Thoas who was just outside of New York City, was informed that a plane struck the World Trade Center. He recently left active military duty, but he quickly put on his Marine uniform and drove twenty five miles toward the crumbling Towers to give his help. Along with another Marine, David Karnes, Thomas presented a plan for a search and rescue mission of the area and tried to enlist additional volunteers on site to help. The other people felt the mission was too dangerous to help them, so the two Marines were determined to help and with their flashlights and an Infantryman’s shovel, they climbed the scalding ruins calling out, ” United States Marines”, is anyone out there?” Finally hearing a response, the two Marines dug ceaselessly into the burning and twisting rubble to find two men, police officers injured, but still alive. Jason Thomas heroism that day is so remarkable that his actions are depicted in the 2006 movie, ” World Trade Center” directed by Oliver Stone. He said, ” This was one of the best programs I’ve organized in my professional career. Jason Thomas is absolutely phenomenal and every human being needs to experience this presentation.” Jason Thomas heroism that day is so remarkable . He is an extraordinary man who stands tall on 9/11 and saved the two Port Authority police officers from the rubble on that terrible day. Sgt. Thomas is unassuming and his efforts to save those trapped officers have made him a part of American history. The Thomas Family was the feature of a special two hour episode of ABC’s Extreme Makeover, which was nominated for an Emmy. We thank you, Jason Thomas for your courageous and brave service to our Country on that fatal day of September 11, 2001! You are a True Hero and we will always remember you!