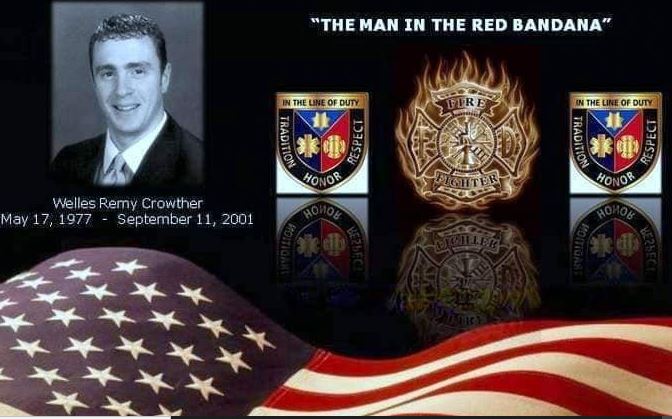 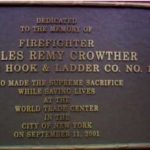 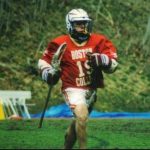 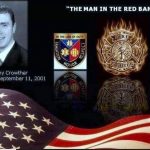 Welles Remy Crowther was born on May 17, 1977, at Lying-in-Hospital, in New York City. At sixteen, Welles joined Empire Hook and Ladder Co., No. 1, in Upper Nyack, New York, as a junior member. When he turned eighteen, he completed the New York State training program in firematics and became a full member of the company, fighting fires and dealing with emergency situations. After graduation from Boston College, he joined Sandler O’Neill and Partners, 2 World Trade Center, 104th., floor, NYC, working first in research and then as an equities trade, which earned himself his series of 7 license. On September 11, 2001, when the attacks on the World Trade Center began, he became a firefighter. Welles’ final hour remains a mystery, when eyewitness reported a mysterious man wearing a red bandanna on the 78th. floor, sky lobby of 2 World Trade Center, when a second plane crashed into into the South Tower. After the plane hit, he appeared, “out of nowhere” wearing only a T-shirt and his red bandanna, which he used to cover his nose and mouth, to give protection from the smoke and debris. He found and directed dazed and confused victims to an only stairwell that was open for escape and he carried a woman down to the 61 st., floor. He returned to the 78th., floor bringing down a second group of survivors. Welles spoke calmly with authority, and was well trained to have saved so many people that day. Three years later, the Crowther Family learned that Welles and other members of the FDNY with whom he was recovered, had been on their way back to the South Tower, with a Hearst ” jaws of life” tool to free victims who were trapped under debris, in the sky lobby. We Honor and Remember you, Welles, for your brave courage to our Country! You are a True Hero, never to be forgotten!