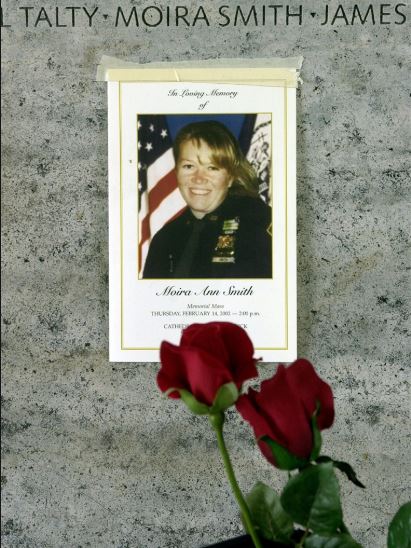 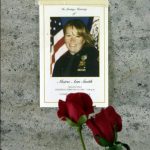 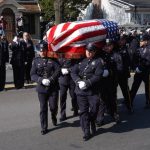 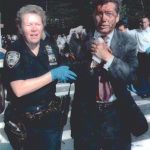 We Remember You With Love, NYPD Officer Moira Smith

NYPD Officer Moira Smith, a thirteen year veteran, was the first officer to report the terrorist attacks of September 11, 2001, when she saw the first plane strike the first tower of the World Trade Center. She ran into the towers and immediately began assisting in the evacuation. Always showing her calm side in difficult situations, Officer Smith was last seen heading back into the South Tower to help evacuate more people. After the immediate collapse of that tower, a brief radio transmission from a female officer calling for help was recorded and later identified as Officer Smith. Her calmness under pressure was remembered by a survivor, Matin Glynn: ” The mass of people exiting the building felt that calm assurance that they were being directed by someone in authority who was in control of the situation. Her actions even seemed ordinary, even commonplace. She insulated the evacuees from awareness of the dangerous situation they were in, with the result that everything preceded smoothly”, said Glynn. Officer Smith remains were recovered in March of 2002 and her shield and ’13’ collar brass indicating her assignment to the 13th., Precinct, are preserved in the 9/11 Museum in New York City. Officer Smith was the only NYPD female police officer to perish at Ground Zero. She is survived by her Husband and two year old Daughter. We will always honor you for your Service and Sacrifice to our Country! You are a True Hero, who will never be forgotten!