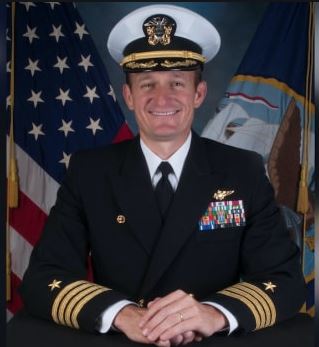 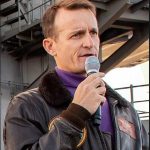 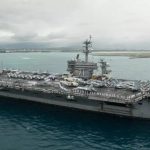 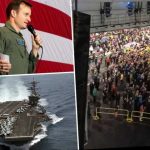 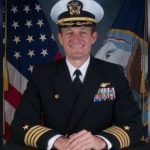 Captain Brett Crozier, USN, was the skipper on the USS Theodore Roosevelt. He was fired abruptly from his duty on Thursday, April 3, 2020, for writing a letter describing the COVID-19 virus outbreak on the 4,800 person ship, pleading for help from his Senior Officers. His Aircraft Carrier is sidelined in port in Guam. What a touching and heart warming send off his Sailors gave him as he left his Ship. The Sailors chanted,” Captain Crozier, Captain Crozier,” and also clapped their hands. ” That is how you send off one of the greatest Captains you ever had, “said one of his Sailors. About 70,00 people have signed an online petition calling for the Skipper to be reinstated. Captain Crozier began having symptoms before he was removed from his Ship. Crozier pleaded with the Navy leaders, “that decisive action is required,” to remove a majority of ships personnel and isolate them for two weeks. Unfortunately, Captain Crozier should not have written a letter to his Senior Officers, as it was going outside the chain of command and too widely disseminating a memo over an unsecured system. The letter was published in the San Francisco Chronicle on Tuesday, March 31, 2020. Navy Secretary Thomas Modly told reporters, ” his letter misrepresented the facts of what was going on and demonstrated extremely poor judgement in the middle of a crisis. I have lost faith and confidence in the Captain on his actions” said Modly. The Navy officials in Washington D.C. have been mislead in their decision of firing Captain Cozier. Captain Crozier was thinking only of his Sailors and had their best interest at hand in trying to help those who were tested positive and he also tried to protect his other Sailors who were in harms way of the virus. Captain Crozier has sacrificed his own life now, as he fights to recover from this virus. Thank you Captain Crozier for your brave commitment in helping your Sailors of the USS Theodore Roosevelt! You are a True Hero and we will remember you for your selfless Service and Sacrifice to our Country.